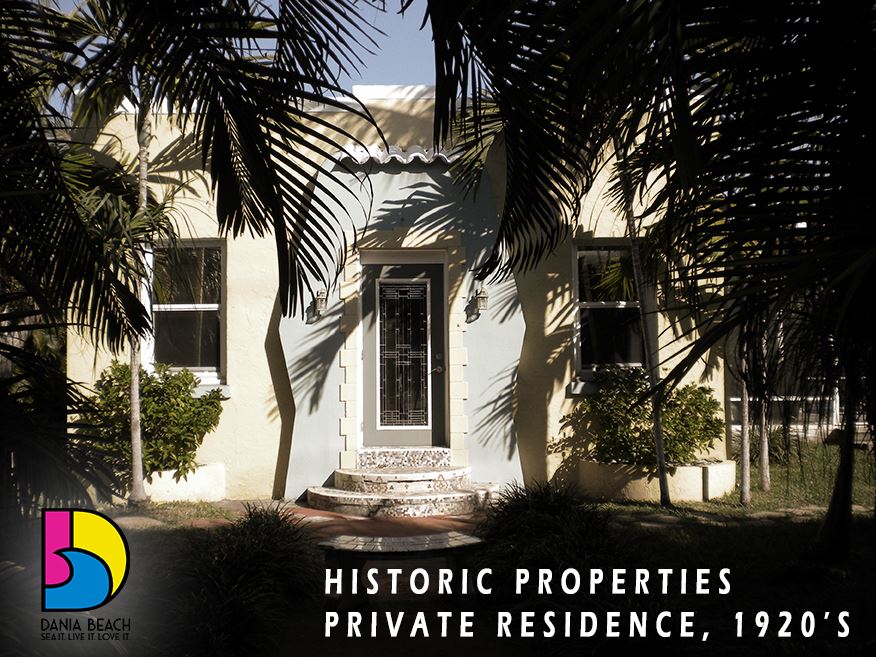 101 SE 2nd Street (Original owner unknown)
The private residence is locally significant and may be eligible for the National Register of Historic Places for its architectural merits and period of construction. The building possesses significance as the residence of John Milliken. Milliken was a prosperous businessman and civic leader who served as Dania’s first mayor. The building possesses significance for its distinct architectural design and craftsmanship in the Mission style and for its late 1920’s construction. It is particularly noteworthy for being one of the first dwellings constructed in the area in the aftermath of the 1926 hurricane that retains its integrity of building materials, location, and design.


John Milliken traveled to South Florida in 1897, with intention of establishing a home and business in the sleepy town of Modelo, later known as Dania. Milliken, as with many of the city’s early pioneers, was attracted to the area’s rich land and cheap prices. He purchased and developed 45 acres of land that harvested tomatoes and citrus trees on some of the city’s most fruitful farmland, located on the outskirts of Dania’s boundaries. Milliken built an access road to reach his farms. The road is known today at Stirling Road.  Elected in 1904, Milliken served as the city’s first mayor. In addition to his agricultural and civic endeavors, Milliken owned several buildings in downtown Dania, including one of Dania’s most popular social spots, the ice cream parlor, and soda fountain. Milliken later settled into a residence in southeastern Dania and was not only know for his various business dealings, including lumber, stone, and concrete but was also renowned as an author. Milliken’s numerous business and civic endeavors helped influence the early character and economic development of Dania.


The one-story, concrete block structure stands on block 3, lot 6 of the amended Mason Subdivision. The textured stucco exterior follows an irregular pattern along the structure’s west and east elevations. Various Mission styled influences can be seen throughout the structure’s aesthetic ornamentation that includes a flat roof with molded coping along the parapet and asymmetrical canals along the upper exterior wall. A stucco chimney projects from the northeast corner of the flat roof. The front entrance, centered on the south elevation, displays a stone surround with a keystone that highlights the curved front steps and decorative barrel tile roof. Fenestration is symmetrical with 1/1 double hung sash windows, with each protected by metal louvers. The property is encompassed by thick foliage that filters noise from the nearby commercial region.

Found just to the north and adjacent to the main dwelling is a two-story garage apartment. With its concrete block, textured stucco exterior, flat roof and molded coping along the parapet, the structure mirrors the Mission style of the main dwelling. Fenestration consists of 1/1 double-hung sash and jalousie windows. Two separate entrances provide first and second-floor access to the building. A single French door provides first-floor access located at the southeast corner of the south elevation. The second entrance lies on the second floor of the south elevation and can be accessed by a concrete stairwell. The first-floor garage/car entrance is currently enclosed by hinged vertical wood plank doors. No other exterior ornamentation is present.

Both the main dwelling and garage apartment retain their historic integrity of location, design, and craftsmanship. The continued preservation of the city ’s built environment is of critical importance and both buildings represent key historic and architectural example of that heritage.