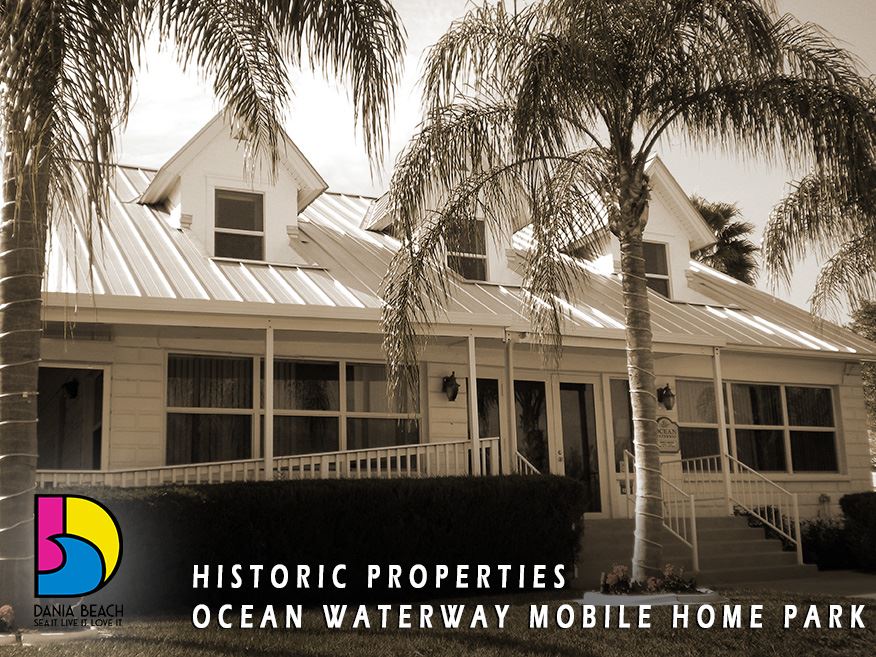 The City of Dania Beach designated this structure as a historic property in 2005 by Ordinance Number 2005-028.

The Ocean Waterway Mobile Home Park Office may be eligible for local significance for listing on the National Register of Historic Places in the area of architecture. While the building’s style was common during South Florida’s early residential construction, few such examples remain in Dania Beach and Broward County. The retention of the structure’s integrity of location, building materials, fenestration design allow this structure to be classified as architecturally significant.


Russell Daniels established himself in Dania in 1915. Daniels owned and operated a horse ranch that encompassed the surrounding property of his residence until he relocated to Okeechobee, Florida in the 1950’s. Lying along the northwestern edge of Dania Beach, Daniel’s property ran adjacent to the Bryan Family farm and to surrounding orange groves owned by John Millikin, local author, businessman, and Dania’s first mayor. Upon relocating to Okeechobee, a common occurrence after saltwater intrusion ended Dania’s agricultural era, Daniel’s took up the lucrative business of cattle farming, as both land and living expenses grew more affordable in Central Florida.


Located at the outskirts of Dania’s most northwestern boundary, the two-story rusticated concrete block dwelling lies at the center of what is currently the Ocean Waterway Mobile Home Park, a senior residential neighborhood. The side facing gable building measured 4 bays by 4 bays and has an irregular floor pan with an east elevation entrance and west gable extension. The exterior is finished with stucco over its rusticated concrete block structural system. Most of the original structure’s fenestration remains intact and includes 1/1 double hung sash windows. However, many windows are covered with louvered shutters and several original 1/1 windows were replaced with metal awning windows, most notable along the enclosed front porch. The structure’s gabled roof is protected with composition shingles and includes three gabled dormers that lie on the east elevation. Typical of the area’s pragmatic vernacular architecture, the exterior façade lacks any detailed ornamentation. The original two-story structure was constructed with a first story porch that protrudes from the building’s front façade; it was later enclosed with metal awnings windows. The composition shingle roof and enclosed porch appear to be the only major alterations in the structure’s appearance since its construction.

The interior of the structure retains much of its original craftsmanship and design. Most of the interior’s wood detailing remains including the turning spindle work in many doorways and on the main stairwell. Currently, used as the office of the mobile home park and as a community center, the floor plan retains its integrity of design and is a good example of adaptive use.
[]