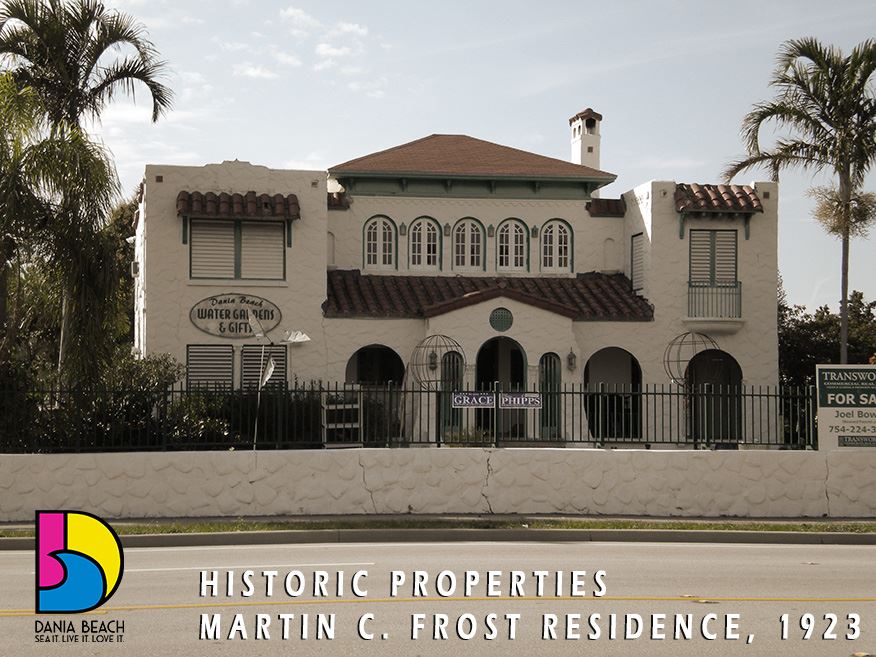 The Martin Frost House is significant at the local level in the area of architecture and community planning and development and may be eligible for listing in the National Register of Historic Places. The house is associated with Martin C. Frost, one of Florida’s largest tomato farmers and a Dania politician and developer. The residence stands in the Dania Heights subdivision, which Martin Frost opened for development in October 1923. The dwelling was completed by the following year by Edgar S. Tubbs, a local contractor.

The property possessed significance as one of the largest and best-executed examples of the Mediterranean Revival style in the city. The residence typifies the exuberant architecture of South Florida during the land boom of the 1920’s.  In addition, it stands as one of the best preserved historic building in the city along Federal Highway. Indeed, few buildings in Dania Beach better portray the city’s heritage than the Martin Frost House.


Born in Wisconsin in 1886, Martin C. Frost arrived in Dania in 1901 with his family. After completing public school, Frost opened his father’s general store and, for a brief period, worked in the lumber industry in his native state. Then, 1910, he returned to Florida to embark on a career in farming, specializing in the cultivation and marketing of tomatoes. He acquired property west of the Town of Modelo (the original name of Dania Beach), where he began draining and clearing land for a farm. In 1915, he formed a partnership with Miami businessman M.C. Hardee. Through their association, named Hardee & Frost, the pair developed the East March grove, a 200-acre tomato farm at Hallandale. Hardee had arrived in Dania Beach in but moved to Miami in 1919.

At East March, the partners installed a pumped drainage system to remove excess water from the fields during the rainy season, an innovative feature in south Florida. The system saved several large crops from ruin, and eventually, the Hardee & Frost built packing houses in Dania and Hallandale to market their vegetables. In 1922, the company harvested five hundred crates of tomatoes per acre from its East Marsh fields, making Hardee & Frost the largest producer of

tomatoes in the state. The company’s East Marsh variety of tomato became a standard in Florida’s truck crop industry.

Martin Frost success as a farmer spilled over into local politics. He first won election as an alderman in November 1912. Two years later, he won the mayoral race, serving as mayor of Dania Beach between 1914 and 1917 and again, after a two-year hiatus, between 1919 and 1922. Nine years later, in  1931, the voters of Dania Beach returned him to the mayor’s office.

When Frost’s father, A.C. Frost, left Florida in 1920, Martin inherited his position as a sales representative for the Model Land Company in Broward County. Martin also represented the Florida Atlantic Coast Canal and Transportation Company and served as a director of the Dania Bank. Frost also succeeded his father on the Board of Commissioners for Broward County, winning the election of the county commission seat in 1922. The following year, near the peak of this business and political careers, Martin Frost opened the Dania Heights subdivision and built the dwelling on South Federal Highway. He retired from farming and politics soon thereafter, excepting his brief return to the mayor’s office in 1931. He also ended his decade-long association with M.C. Hardee in 1923, though he continued to serve as a Director of the Dania Bank. Martin  Frost died in 1965.


The two-story, hollow tile dwelling stands in lots 1-3 and 64 25-26 of Dania Heights subdivision. The property measures 145 feet along Federal Highway and 250 feet deep along Southwest Fourth Street. A masonry privacy wall finished with textured stucco surrounds the property. Orb finials stand at the corners and entrance breaks in the wall.

The dwelling displays typical influences of the Mediterranean Revival style. Its complex roof plan consists of flat and hip portions with shaped parapets, ceramic tile cresting, and pent roofs. The pent roofs are finished with carved wooden brackets and ceramic tiles. A brick chimney projects high above the roof system. The house displays arched vents and a gabled roof protected by ceramic tiles. Fenestration is irregular and asymmetrical with six and eight light casement windows admitting natural light into the interior. Many of the windows are protected by louvers. Textured stucco serves as the exterior wall surfacing and contrasts with pine and cypress detailing employed on the doors, windows . An veranda wraps along the front façade and north elevations. French doors open leading from the veranda into the interior tend to blur the distraction between outside and inside.

The front, or east, façade displays a central block with asymmetrical projecting wings. The second story of the central block contains a series of nine-light casement windows set in arched surrounds, divided by lighted sconces and bracketed by statuary niches. A paneled frieze highlights the eve line of the hip

Arched openings along the front part of the veranda are filled with cypress frames and turned balusters. A small gable extension projects from the north elevation of the veranda. French doors with fifteen and twelve lights open from the veranda into the interior spaces.

The south elevation had barrel tile cresting along the parapets and symmetrical fenestration. The west, or rear, elevation had a one-story extension with shaped and stepped parapets. Its asymmetrical fenestration includes a leaded art-glass window set in the second story. The interior had a double fireplace, high ceilings finished with hewn beams, and spacious rooms.

A two-story garage apartment stands near the southwest corner of the property. It has a rectangular plan, and steps along the east elevation. A pair of garage doors opens along the north elevation. The flat roof upon the garage features stepped parapets finished with barrel tile cresting. Textured stucco serves as the exterior wall surfacing. The windows are protected by louvers.

* The City of Dania Beach designated this structure as a historic property in 2000 by Ordinance Number 2000-038. 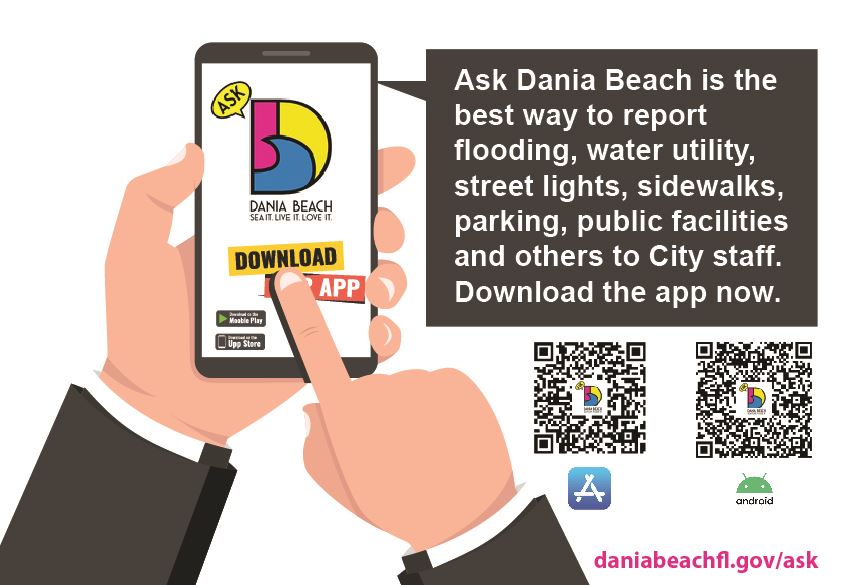