Experience a Destination with Endless Opportunities!

Visit Dania Beach to Sea it, Live it, Love it!

The City of Dania Beach is an award-winning "Blue Wave Beaches” with an exceptional beach, Pier and Marina location you'll want to discover! Dania Beach is one of the few beaches in South Florida that offers dining and nightlife directly on the water!

Dania Pointe is the premier destination for shopping, dining, and entertainment in South Florida. Make sure you visit the restaurants, bowling alleys and stores in this delightful outdoor shopping center.
We invite you to come visit #daniabeach to discover our unique charm as Broward’s First City!
The City of Dania Beach was incorporated in 1904 as Broward’s first city. The City is located immediately south of the Fort Lauderdale-Hollywood International Airport, Port Everglades, and the Broward County Convention Center. Dania Beach operates under a Commission-City Manager form of government and provides services to an estimated 30,000 residents.

Derecktor Shipyards, one of South Florida's largest yacht repair hubs, owns a $1 million lift for boats up to 100 feet long. The yard also owns a $3.5 million lift that is nearly eight-stories-high, to handle super-yachts 100 feet to 200 feet. It is the tallest mobile boatlift in the world.

The City’s 120 Slip Marina, located between the Intracoastal and the Atlantic Ocean, Bass Pro Shops and Diver’s Direct are major attractions for people interested in outdoor sports, boating, and fishing.

SeaTech, FAU's Institute for Ocean and Systems Engineering, is the nation's first ocean engineering program. The world-class faculty is engaged in research and technology development in the areas of acoustics, marine vehicles, hydrodynamics and physical oceanography, marine materials, and nanocomposites.

Dania Beach has implemented Oasis - Rebuilding Neighborhoods, an innovative community project that is improving the city one street at a time. The goal is to foster neighborhood pride and improvement, and through a “ripple effect” induce owners and tenants in the City to work together to beautify the City, increase property values and reduce crime.

The DCOTA Design Center of the Americas, The Wiener Museum of Decorative Arts, The Holocaust Documentation & Education Center bring visitors from all over the world right to the heart of our beautiful city.

DANIA BEACH - SEA IT, LIVE IT, LOVE IT 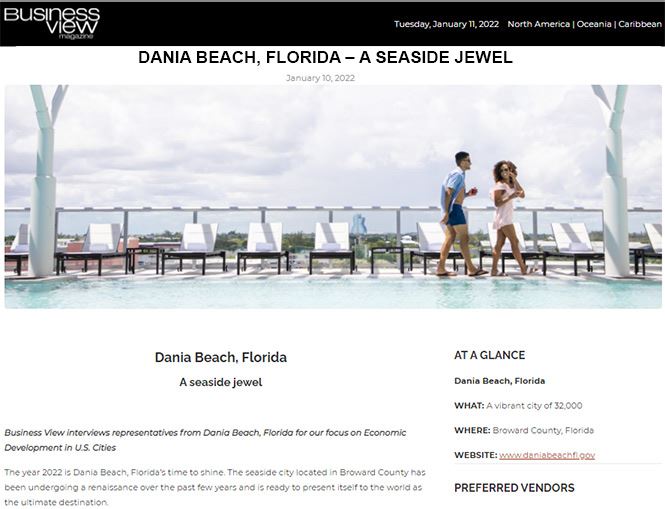 The year 2022 is Dania Beach, Florida’s time to shine. The seaside city located in Broward County has been undergoing a renaissance over the past few years and is ready to present itself to the world as the ultimate destination.
Business View Magazine interviews representatives from Dania Beach, Florida for a focus on Economic Development in U.S. Cities.
businessviewmagazine.com/dania-beach-florida-seaside-jewel

* Historical Photos and Captions by C.K. "Mac" McElyea
A City Rich in History
Dania Beach is Broward County's First City. The historic roots of the first city in Broward County date back to the 1880’s, when much of what is now the FEC railroad line was laid through the area. In recognition of this transportation advantage, a pioneer and developer named W. C. Valentine planned a settlement called Modello and 12 Danish families moved from Chicago to settle there in 1898-1899. Three years later, 30 Danes were recruited from Oconto, Wisconsin to colonize the settlement, and the first home was built by A.C. Frost, for whom a park is now named. Frost built the first general store in 1902 and became Modello’s first postmaster. He also built and donated the Towns first two schools. The following year, Dania Methodist Church was erected, becoming the City’s first place of worship.

When the Town was incorporated in November 1904, its 35 residents, most of whom were Danes, changed the name to Dania. By 1912, Dania was a thriving community of almost 1200 people and continued to grow through the 1920’s when the City suffered tremendous setbacks. In 1925, the Dania Hotel caught on fire, and the Bank of Dania failed due to embezzlers in the Bank’s Atlanta home office. The ‘26 hurricane with its 200 mile-per-hour winds devastated the Town, destroying the first church building completely, and subsequent damage prompted residents to vote for annexation to the neighboring City of Hollywood. De-annexation came in 1927.

Tomato Capital of the World


Early immigrants prospered in tomato farming and, as early as 1910, the Florida East Coast Railway was shipping to northern U.S. cities from "The Tomato Capital of the World". During the 3-month winter harvest, over 200 farmers shipped 1,000 to 1,500 train carloads of tomatoes and V. Taoring of New Orleans set up a tomato paste factory which contributed to local prosperity.

In 1927, the first "Tomato Day Celebration" was held to raise funds for the new Dania Methodist Church. Attracting a crowd of over 5,000, it was so successful, that the celebration continued into the 1940’s featuring messy, but official, tomato fights and a Miss Tomato Festival Pageant. In the late ‘40’s, the tomato boom was over, as crops began to fail from salt water intrusion into the fields.

The Antique Capital of the South


Just as the Tomato Industry was fading, a new type of commerce ... the antique business ... arrived, when Genevieve and Willard Ely set up shop in 1945. It took 10 years for other antique businesses to follow, but it wasn’t long thereafter that Broward’s first incorporated city once again gained fame, this time as the Antique Capital of the South. Today there are over 100 antique shops and malls vending their wares along a few short blocks of Federal Highway in Downtown Dania Beach.

Antique Row has become not only a browser’s and shopper’s paradise, but also the stores themselves are housed inside buildings steeped in the City’s history including Broward County’s first movie theater.

The City has a wealth of historic architecture and a variety of architectural styles including Greek Revival (Dania Bank Building 1923); Mission Revival (Model Land Company Building 1900); Mediterranean Revival (the Martin Frost House 1913); and the Dania Beach Hotel, built by Francis Abreau in 1925. Art Deco styles are also present in the Florida Theater (1939) and the Pirates Inn, formerly the Hotel Katherine (1940).